It is a great thing to be able to podcast with a good friend and talk about things you love. It is even greater when you find others in the world and they share in that love of things you do and even enjoy that podcast show you do. But what you are about to read is one of the greatest things I have gotten out of doing a podcast. It’s one thing to have someone say “good show” or “nice team idea” but to take the time out of someones day to write a story based on the fluff and flavor of ideas in your head is so amazing.

Below is a small story about the Orclahoma Ginger Badgers team that I am taking to Chaos Cup. Keith Vandenberg didn’t talk to me about writing this story, he simply listened to Both Down Episode 8 and went with it. I hope everyone enjoys this little treat as much as I did, thank you Keith.

YOU CATCH MORE FLIES WITH HONEY…

Eentagh D’Vainkebr took the news as well as could be expected. Vorbag Beastlover had just informed him that he was the last cut on the team going to the famed Chaos Cup. Eentagh growled as he upturned the crude desk between him and the Orclahoma Ginger Badgers’ captain and head coach. He pounced on him like a wild animal. He was in the process of strangling the stunned Blitzer when two of the team’s Black Orcs grabbed him by the arms and threw him out of the locker room.

All that rage… Vorbag wondered if maybe he had made a mistake in cutting him.

Eentagh was crushed. This was the opportunity he had been waiting for his whole life. If he couldn’t even make it in this second-rate team, then maybe he just wasn’t good enough. NO, that couldn’t be it! It was all politics! He knew that he just needed to walk onto the pitch to prove himself and then, everything would be alright.

Right then and there, he devised his plan. He picked himself up and headed for the seedy part of town. He remembered his mom telling him about an apothecary of ill repute who might be able to help him. He had once tended to the players of the famous Orcland Raiders but was fired along with the head coach when the team changed ownership and
became the Bad Suns. He didn’t go graciously and it is rumored that he placed a curse on the new team. Was it the reason for their lack of success on the field after the move? No one can be sure but to this day, his name is only uttered when some parent needs to scare a disobedient child into submission.

Eentagh asked around and was always met with alarmed looks, which, frankly, is unusual for Orcs. He finally made his way to his home hidden in a back alley littered with garbage. Even the rats seemed reluctant to scurry up the dim passage. He took a deep breath to muster his courage and knocked on the door. The end justifies the means.

An elder Orc answered. His skin was dark green. Eentagh could see the top of his skull since he was a good head taller than him. He was bald but had a long white beard that hung all the way down to his knees. His left eye was completely white and his prominent lower tusks seemed as sharp as ever. A powerful aura of mystery and evil seemed to radiate from him. Eentagh hesitantly explained the reason for his visit and the medicine man beckoned him in.

A few minutes later and many gold crowns lighter, he hurriedly made his way to The Cage, the well-known Blood Bowl bar. He knew the team would be celebrating since training camp started the next day. In the next few weeks, their whole life would be a long Blood Bowl practice, so it was customary to party hard the night before to boost the team spirit.

Eentagh ordered a few drinks that he poured on the floor when no one was looking. He left the empty mugs on the table. In his last drink, he poured the content of the vial he had purchased. The foul smelling liquid hissed as it came in contact with his beverage. He swirled it about and put it down in front of him. He laid his head on the table and smiled to
himself. Then he waited. 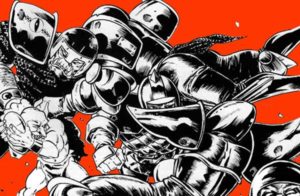 He didn’t have to wait long before he heard the boisterous voices of the Ginger Badgers. Ginger Badgers don’t care! They walked in as if they owned the place. Groupies gathered all around. The first round was offered by the barkeep to encourage the local team. The players lifted their mugs high over their heads and cheered. The ale was drained in three large gulps. Then, they looked around to seat themselves; it was going to be a long night!

He grabbed and drained his drink. Jocks… So predictable.

“What’s this crap? Honey mead? You sissy! Get the Heck out of here!”

The whole team burst into laughter. Eentagh stepped out and started to hum on the way back home.

The next morning, a loud knock on his door got him out of bed. A jittery
Goblin greeted him.

“Gudlok’s out, you’re in! Report to the stadium immediately!”